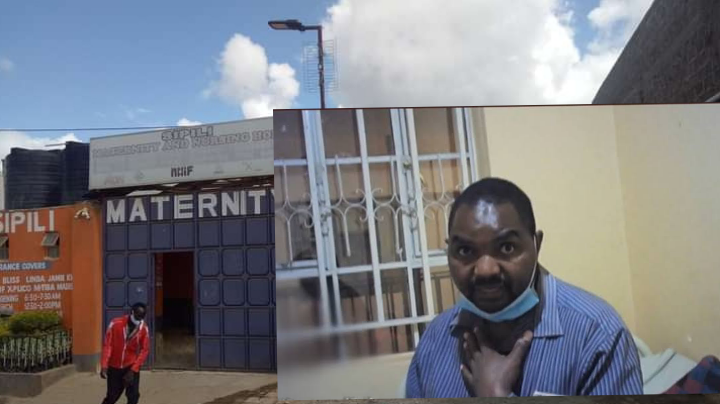 For more than a decade, Laikipia’s Sipili Maternity and Nursing Home has been in existence and has gradually expanded over years. The facility offers inpatient and outpatient services, theatre, ambulance and even operates a funeral home. It is the only nursing home which is accredited by the National Hospital Insurance Fund (NHIF) in Sipili town, Laikipia County.

The hospital is owned by a registered nurse by the name George Mbugua who alongside his wife Monica Mbugua oversee the daily activities of the facility.George Mbugua schooled at St. Luke’s College of Health Sciences in Kinangop and holds a diploma in nursing. The nursing school was established by Kenya Conference of Catholic Bishops.

As a man who schooled in a faith based organization, one would expect that Mbugua would professionally attend to the patients in a compassionate manner. That however is the opposite of what he does; he has been accused of sexually assaulting female patients and workers.

In an exposé titled ‘Doctored Evil’, NTV’s Ngina Kirori walked to the facility and unraveled the harrowing encounters that patients are subjected to at Sipili Maternity and Nursing Home.

According to Esther, (not her real name) she was inappropriately touched and seduced by Mbugua when she was admitted at the facility. Esther says she became suspicious of Mbugua’s tendencies to repeatedly enter her room and the matter got worse to a point that he began seducing her.

“I asked him why he was not attending to other patients, in response he told me he likes watching over his patients,” Esther narrates.

Mbugua then tells Esther: ” The reason you see me coming here repeatedly – I don’t know what attracts me, but I just feel you’re in my heart.”

On her third day in the facility, Esther’s condition had worsened. She narrates how Mbugua invited her to his room obstensibly to discuss her condition. Unbeknownst to her, she was going to experience one of the most tormenting occurrence in the hands of Mbugua.

“Inside the doctor’s room, there was another partition. During our conversation, Mbugua ordered me to stand but I declined because I was in severe pain. He held me by both of hands as I resisted. He asked me why I was afraid of him yet he was my doctor. He then put his hands in my underwear,” Esther recalls.

Her encounter with the medic prompted her to request for discharge the following day albeit in a frail condition. Esther says she now suffers psychological trauma and ‘hates herself’ as a result of what befell her.

Having received numerous reports, NTV journalist Ngina Kirori decided to do an undercover investigation and posed as a patient seeking treatment for peptic ulcers flare up.

The journalist made sure she recorded the event using hidden cameras as the matter unfolded before her. Kirori was admitted and it was during the conversation with Mbugua  that she discovered she wasn’t in safe hands. The medic crossed boundaries and questioned her about confidential affairs.

During her stay, she had a conversation with another 17 year old girl admitted at the facility. The teenager revealed that the hospital’s director had a penchant for sexually assaulting female patients. In the midst of the night, the matter unfolded as Kirori heard of the girl screaming.

She rushed to her room and found  Mbugua coming out. In her conversation with the teenager Kirori got wind of what had just happened. Below is part of the recorded discussion:-

Kirori: Are you in pain?

Girl: On my back. He pressed my back and legs, then he told me to raise my legs.

Perhaps afraid that his distasteful vice had been revealed, Mbugua was quick to reach out to Kirori to distance himself of any wrongdoing.

“This is the third day I’m meeting her, In my heart, I know I’ve done nothing wrong. I didn’t touch her, I will always be far from her,” he said.

He has money, operates using an expired License

The NTV journalist reported the matter to Ngarua Police Station and was surprised at how the issue was casually handled. She says the station did not even give her an O.B number. According to Sipili residents, Mbugua has enjoyed immunity to the law because he has deep pockets.

On further inquiry, it was revealed that Mbugua had not renewed his license since its expiry two years ago. With the matter now in public eyes, an official from NHIF says the facility faces suspension pending further investigation.

Just a day after the revelation, the Kenya Medical Practitioners and Dentists Council (KMPDC) was prompted to revoke the operating license of Sipili Maternity and Nursing Home.

Moreover, the hospital was ordered to immediately transfer admitted patients to their facility of choice.

“After a careful consideration of the matter and the nature of allegations and the need to protect the public, the council hereby revokes the operating licence (No 55590) of Sapili Maternity and Nursing Home pending the hearing and determination of the matter,” reads the notice in part.

4 reasons why the health sector will not forget Moi